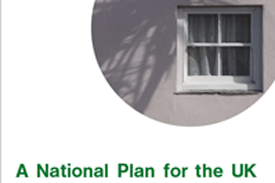 The purpose of this report is to advance a much-needed debate about how to move the UK out of the counterproductive politics of austerity and into the age of the Green New Deal. This is a matter of utmost urgency. If it isn’t introduced rapidly, we are likely to enter another economic slump. A Green New Deal could be implemented now if the political will existed. It calls initially for a £50 billion a year investment programme to boost economic activity, in a way which provides jobs on a living wage in every community in the UK, while reducing our ecological impact.

What the Group say about the Green New Deal:

“It is crucial that government replaces destructive austerity policies that have created a low-investment, low-wage, heavily indebted, unbalanced ‘Alice in Wongaland economy’ with massive investment in a Green New Deal. Central to this must be the creation of real jobs that pay a living wage, helping to transform every corner of the UK while overcoming the present lack of sustainable and adequate effective demand in the economy. This could be financed, in part, by a form of ‘Green QE’: with government co-operating with the Bank of England via its money market operations, to create financial products at very low rates of interest to fund green infrastructure investment. This investment would, thanks to the multiplier, pay for itself.” says Green New Deal Group member, Ann Pettifor.

“A crackdown on tax dodging which we believe stands at £95 billion a year could fund the Green New Deal. A significant part of this could easily be recovered if H M Revenue & Customs had enough staff, and were backed by stronger laws. Further tens of billions could come from a programme of ‘Green’ Quantitative Easing to fund infrastructure and create jobs across the country” says tax expert and Green New Deal Group member, Richard Murphy

“There is huge, and as yet untapped, potential in renewable energy, energy and resource-use efficiency and the transformation of our transport system that would create high-quality jobs across the country and reduce the UK’s overall ecological impact. If we are serious about staying below 2C warming, as we have legal obligations to do, then to invest in a destructive Dash for Gas when there is a Green New Deal on the table borders on criminal negligence by my parliamentary colleagues” says Caroline Lucas MP.

The Green New Deal Group is, in alphabetical order:

Charles Secrett, former Director of Friends of the Earth, and founder and coordinator of The ACT! Alliance

New Weather @NewWeatherInst
RT @badvertising11: In Belgium a group of organisations are mounting up pressure against advertising for cars - we cover their campaign in…
(about 2 days ago)

New Weather @NewWeatherInst
RT @AndrewSimms_uk: Maybe unpopular to say, but aviation industry lobbying on concerns of 'affordability' is misleading &/or disingenuous.…
(about 2 days ago)
Follow @NewWeatherInst

We are pleased to work with…